This month, we want to show you another example of Cougar Excellence in our communities. The Board of Trustees has named Mr. Otis Monday as our Community Member for December. Mr. Monday is Crosby’s biggest superfan. He says “I feel part of them, I’m a cougar at heart, I just feel part of them.” If you don’t know him, you’ve probably seen him. Mr. Monday attends almost every football and basketball game. When we say he goes to every football game, we mean every game. “I had surgery in 1977, a hemorrhoidectomy. They let me come home that day. Crosby was playing Silsby. I told my wife, ‘Baby I’m going to the game.’ She said ‘Man, you’re crazy!’ I said ‘Give me my little donut … I watched the game as long as I could. As the pain got overbearing, I had to go home. But I can say I didn’t miss that game.” Mr. Monday’s love of the Cougars has been around for more than 60 years. He graduated from Drew High School in 1963 where he played ball himself. He’s 76 now and has been a Cougar fan for almost his entire life. “I came back from Guam in the Air Force in 1969. I’ve been following the Cougars since 1969.” Mr. Monday also goes to almost every football practice at Cougar Stadium. He’s seen what makes each team since 1970 so special. His passion for all sports comes from a desire to see Crosby outshine everybody. “I want the Cougars to do their best .. Soccer, volleyball, I want them to do their best. I want to see the Cougar name in the limelight.” Mr. Monday’s teammate in life sat next to him at every game, but his wife Sandra passed away in January 2020. She wasn’t able to see the Crosby football team make it to state. Mr. Monday still sits in the same seats. 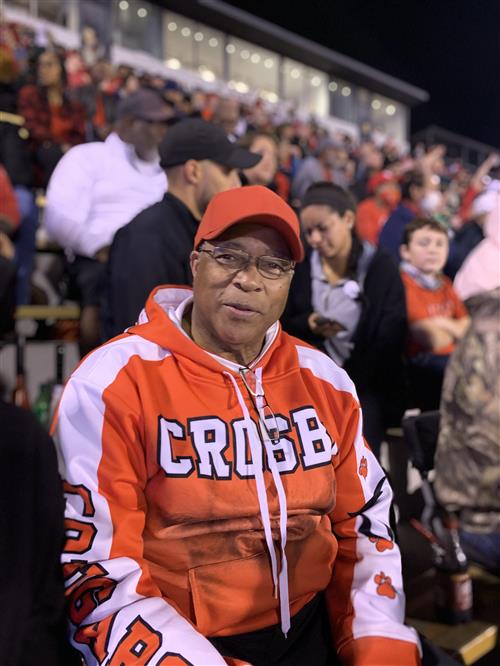 Every Cougar is his own family now. “I came out one day [to a practice] and a lady came up and said ‘We have a good group of boys.’ She asked which one is yours? I said ‘Mine. All of them.’ She said ‘All of them?’ I said, ‘Yes ma’am. .. If you’re a Crosby Cougar, they’re all mine. She said ‘Wow that’s wonderful.’ I said “I love them that much.” Through the decades, Mr. Monday has shared some valuable lessons for games that can translate to lessons about life. Crosby ISD and the Board of Trustees saluted Mr. Monday during December’s Board of Trustees meeting. When asked why he loves the Cougars so much. Mr. Monday said, “I want to feel close. I feel close. I just want to feel part of them.” Thank you for being our biggest supporter and superfan!