Crosby, TX (May 23, 2022) - This week, the Crosby ISD Board of Trustees recognized top scholars, top athletes, and extra-curricular groups this Semester.

First up, the Culinary Arts students from Crosby High School who catered dinner for the Board of Trustees. The honey mustard chicken, veggies, salad, rolls, and cheesecake were delicious! Thank you to Chef Espinosa and our Junior Chefs! 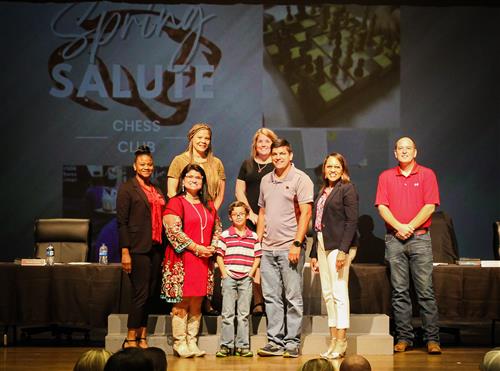 In only its second year of existence, the Crosby High School Chess Club had two members and two Junior members compete in a chess tournament at Sterling High School. Of the four participants, three of them were able to place in the top ten of their group. 3rd grader Jace Castro from Barrett Elementary won 3 of 5 games. 9th graders Malik Tezino and Isaac Landry both won two and tied two of their 5 games. We are proud of their success and are hopeful that we will be able to continue to compete in future tournaments and proudly represent Crosby.

During the months of preparing for the One Act Play competition, the students were able to come together and create a world built upon an original script written by theater teacher and coach Raymond Blanchard. The days were demanding, but productive for each of the actors. Our set was built by the cast and crew, with even the final decisions about lighting design being headed by our stage manager and crew. We have gone beyond the district level multiple times in the last 23 years of competing in the One Act Play contest. This year was no exception. Our students were awarded several individual acting awards and technical awards during the 2022 competition. The students are fun to work with and we always look forward to helping them grow to achieve great things in the future.

The Crosby High School dance team, the Cougar Stars, had an amazing year. Starting in January, Kristin Harvey, the Colonel and top officer, attended the Texas Dance Educators Convention as an ALL State dancer. She had the privilege of learning from top choreographers and dancers in the state.  Next was the Cougar Stars competition season during which they won several regional awards. 12 girls placed with Division 1 solos. In March, the team traveled to San Marcos and competed in the Ascension Dance Nationals competition host4ed at Texas State University. This was the first ”Nationals” competition in the history of the team.   The girls walked away with lots of hardware to show off their hard work, winning the title of Overall Grand Champion officer line and runner up for Overall team.   They were also awarded the APEX award for the highest scoring routine of the day. In all, they came home with 27 awards. The Cougar Stars leader - Mrs. Godoy - is very proud of this team, as her first year as the CHS Cougar Star Director.

This season our Boys Varsity Track and Field team was a young but successful one. We qualified for the Area Meet in the 800 meter relay, 1600 meter relay, 110 meter hurdles, 300 meter hurdles, and the mile run. Team members included Logan Ashby, Quincy Jones, Jeremiah Baptiste, Levi Fontenot, Braden Womack, and Kristian Roberson. Jeremiah Baptiste (who started the year on the JV) qualified for the regional track meet in both hurdle races. Our JV Track team won the 21-5A district Championship. The team won 1st place in 7 events at the meet, including all 3 relays. Stars on the sub-varsity level were John Cummings, Brandt Wright, Joel Paredes, Jordan Bass, and David Jordan.

We are proud of this year’s 21-22 girls track team for its accomplishments. We were able to grow our girls track team by at least double and bring out several girls across all sports to participate and compete. Our JV girls were able to win first place at the Barbers Hill Eagle Relays this season. Our varsity girls were able to be very competitive throughout the season. Mayte Tavarez, Abby Ellisor, Olivia Darbonne, and Amelia Horsford advanced to the area meet. Standouts for the season are Taylor Destin, ran 46.33 seconds in 300 meter hurdles and Zaraiya Lee, threw the discus 108 feet 9 inches, both setting school records.Victoria Grace also advanced to the regional meet. As coaches, we value effort and hard work to build our program and set a path for a brighter future. We need to recognize all of the girls who contributed to this season and for helping to build a program we can be proud of.

The boys soccer team had a successful season.  The team finished with a record of 17-5-3, with only one loss during district play.  The boys qualified for the state playoffs for the 7th year in a row. Coach Helburg thanks the team and their supporters for watching the team play in the cold, the heat, all the elements you can imagine.

The Crosby Lady Cougars varsity soccer team finished the 21-22 season with an overall record of 18 wins, 6 losses, and 4 ties.  The Lady Coogs qualified for the State Playoffs with a 3rd place finish in the district with an 8-3-1 record.  Coach Burgess and Coach Marek appreciate the hard work the girls put in this year and are proud of what they accomplished. Thanks for a great season.

The Boys team of Hayden, Ethan, Bryson, Noah, Stephen and Kagen took  2nd place at district and advanced to the regional Championships. 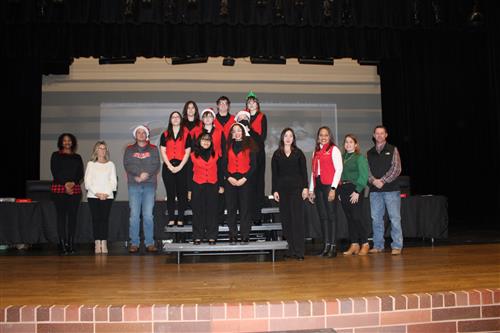 We are extremely proud of the many accomplishments the CHS choir program has achieved in the 2021-2022 school year. In the past year, we had our first Fall concert since 2018; we were honored to sing the national anthem at the Homecoming football game; we created our first Show Choir that has sung at many events; we created our first "Royal Dinner" fundraiser that had close to 300 attendees; we received "Excellent" ratings at the UIL Sight-Reading and Concert competition. We also worked with Theater Arts to create an amazing musical production of "Annie." We had an amazing Pop Show production featuring many bands and solos from the students and lastly but most importantly we have created a safe and welcoming environment for kids to express themselves musically. We consider ourselves the Crosby Choir Family. Thank you for honoring our hard work and accomplishments.

Tonight, we want to celebrate the 19 students who rank in the Top 5% of the Class of 2022 at Crosby High School.

Another first for Crosby High School! CHS CTE Audio Video Production students made it to the State Finals in the 2022 UIL State Young Filmmakers Festival.

Mr. Humphreys says “We had fun.” It was a huge challenge to pull off a student film on this level. From the countless script rewrites to the logistics of arranging schedules, to fighting with the weather - we overcame all obstacles that tried to test us. And at the end of it all, we produced one of the best short films to ever be shown at UIL.

The visual arts students in our district competed in the Visual Arts Scholastic Event which is the art UIL competition at every level in our district, high school, middle school, and elementary. At the high school level, we had 36 students medal at the regional level (the most for Crosby in the past five years) and two students advanced to the state level: Karla Gonzalez and Kalynn Aguirre. At state, we had Karla Gonzalez medal on both her pieces at the state level.

At the middle school level, we had 5 students medal at the regional level and one student receive the platinum award which is the equivalent to advancing to state.

At the elementary level, we had 4 students receive gold medals which is also the equivalent to advancing to the state level.

Our visual arts students and teachers have done an exceptional job this year and we could not be prouder. 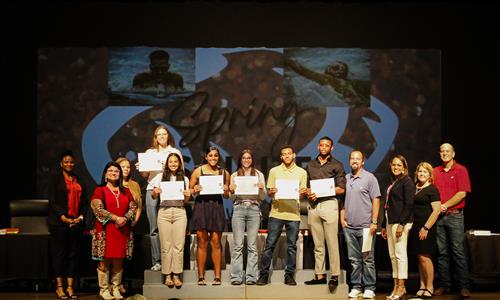 This year, we have had many firsts in the Crosby High School Swim Program. First time having 13 Regional Qualifiers and 1st ever Academic All State as well, just to name a few. Coach Schexnayder is extremely proud of the swim team and all of their hard work and dedication.

The Lady Cougars Basketball team had an outstanding season led by three 4-year varsity letterman seniors. The preseason was one of the best since the 2018 Regional Finals team with a record of 14-7. The Girls won the Bronze Division Championship in the McDonalds Tournament, Silver Consolation in the Lamar Invitational, and made it to the Semi-Finals (3rd Place) in the Gold Bracket of the Aggieland Invitational. District 21-5A is one of the toughest in the state with teams in the top 25 for most of the season. The Lady Cougars beat Beaumont United and Barbers Hill both at home to guarantee an opportunity to take 1st place in the district. Coach Trotter says the overtime game at Barbers Hill was one of the greatest games in her tenure at Crosby. The ladies fell short in OT, but they still finished as District Champions with a three-way tie with Barbers Hill and Beaumont United. The Playoff match up with Manvel was a tough loss, but this team has much to be proud of with a 24-10 season and 10-2 district record. Three seniors - Cortni Harris, Caitlin Harris, and Sequoia Carroll - received multiple recognitions and all 3 moving on to play at the next level.

Congrats to Head Coach Edwin Egans and the rest of the coaching staff. 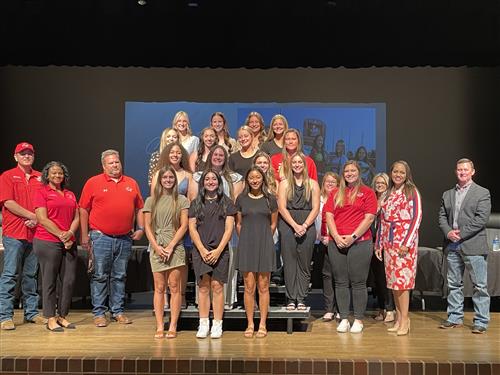 These girls have set numerous records this year.  Let’s start with one of the most impressive. They set school history with the most team wins at 31. Our seniors have left a legacy and left the program better than when they came in.  Over their four years as softball players, they have a record of 85-25. Softball has been Bi-District Champs 3 years in a row, Area Champs 2 years in a row,  made it to the Regional Semi Finals in 2021 & 2022, and the Regional Finals in 2021.

14 players were named to 21-5A Academic All-District.

Grace Sparks was the 21-5A Pitcher of the Year

Hannah Wiggins was the 21-5A Utility Player of the Year 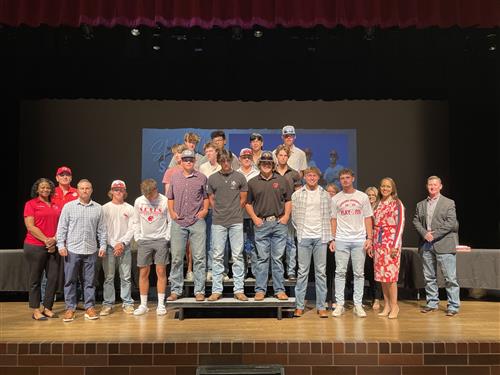 Crosby baseball is very proud of this group, and especially the seniors for bringing back the Champion mindset, and then going out and getting it done.   We went 27-6-3 on the year, and 10-2 in district play, which earned us the title of District Champions.  We earned the title of Bi-District Champions, Area Champions, and Regional Quarterfinalist.

Ten players were named all-district, including pitcher Sean Bazmore as District MVP and catcher Larry Johns as Defensive Player of the Year.

Coach Chris Wiggins was named the 21-5A Coach of the Year.

Coach Wiggins says the young men standing in front of you achieved success because of their hard work, believing in each other and their coaches, and playing for the guy next to them.  We are proud of each and every individual on this team, because they all played a role in its success.