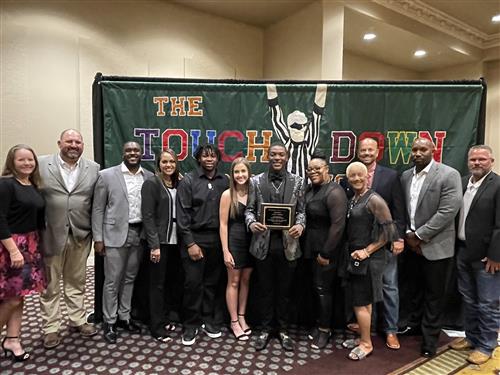 Myles was one of 38 honorees from the Houston region selected ahead of the upcoming football season. The honor team includes 20 offensive players and 18 players on defense.

Myles and the other honorees were recognized and received a plaque during the Touchdowner of the Year event on Wednesday, August 17 at the Bayou City Event Center.

The Touchdown Club of Houston chooses among the high school standouts by studying film, examining recruit chatter, and using preseason rankings. Cyrin is considered one of the best quarterbacks in the state, and this honor cements his status among high school elite student-athletes.

Athletic Director and Head Coach Jerry Prieto says, "Everyone sees all the progress that Cyrin has made on the field, but what is more special is his development off the field.  He has become the leader of the team and is a great individual."

Congratulations to Cyrin and what a big honor for #10. Cougar Pride!